This term has been rather quiet as far as Flash goes due to the pressure of exams and the incremental fading that happens in third term as people move onto their summer activities. The Committee has still been routinely meeting however to discuss plans for next year that can build on the massive progress made in the past year.

In the past year alone – well, since September 2014 – Flash has undergone a number of innovations, renovations and improvements. We’ve completely redesigned the website to be more modern and readable, although this still requires some ongoing work. All of our Facebook and Twitter icons, banners and general branding have been replaced with new designs. But more important than any of the cosmetics, and the thing I’m most proud of, is the professional streamlining of the submission process.

Since October 2014 we’ve had over 60 pieces submitted to us over 5 issues. Each of these submissions was edited personally by one of our editors, and all submissions, regardless of whether they of a standard to be published, received individualized feedback and criticism. We also introduced the Editor’s Choice selection for each issue, which represents the best of the issue as voted by the Committee. The recipients of this award got either a piece of artwork or a signed certificate, as you can see below, to commemorate their achievement. 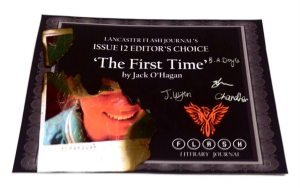 This past year’s Committee has also devoted itself to establishing a community around Flash that didn’t exist in previous years. Each issue had its own Launch Party which saw a number of writers and faculty members pop in to get a sneak peek of upcoming issues. Flash held its very own literary event, The Uncanny, in which Jenn Ashworth and Dr. Catherine Spooner read and discussed aspects of the uncanny in literature. Dr. Spooner even debuted her own poetry at our event which was a unique and unexpected treat.

The achievements of the last year are phenomenal, and as the Executive Editor I could not be prouder of my Commitee. Everything that we’ve done – from catering events, printing out publicity material and decorations – has been from our own pockets and borne from our love of writing, literature and expression.

This is not to say that Flash is perfect, and the established standards of this year require constant maintenance and improvement. The expansion of the committee from six members to eight will hopefully help grow Flash even further and ensure that the high bar we’ve set for ourselves will be met over the coming months.

I have every faith in my successor Sianne Fraser, and the rest of the 2015/2016 Committee, to continue the traditions we began, sculpt Flash into their vision, and continue to provide great literary feedback for student writers at Lancaster University. As for me I have loved every moment of my position with Flash and am genuinely proud of my time here. This is something I could happily do for the rest of my life without complaint and I hope to one day be in a similar position again post-graduation.

Enjoy Issue 14 and keep supporting literary talent wherever you find yourself.

The Editor’s Choice piece, The Weight of Deeds
by Warren Mortimer, edited by Rebecca Parkinson

“Warren well deserves the Editors Choice award. Using the tragic event of 9/11 creates a stunning contemporary poem and a reflection on the modern world with all its flaws. His imagery is raw and fascinating and his style is completely his own. I read the last stanza over and over and see it in a new light every time: it is an amazing piece and was a pleasure to work on.”

“Amalina’s poem truly captures the fragility of elation, and the unavoidable fall back to reality, to ‘human sense’. The contrast between ‘that sky-high feeling’ and the ‘desperate inhales’ and ‘crackling’ cliff reflects the fear that lurks at the back of our minds as we experience boundless idealism: at what point is the inevitable fall?”

“An exciting piece of poetry which reveals enough to make the reader think without leaving them completely in the dark. With typical gothic imagery and a haunting atmosphere of lost time, this is a piece which is both haunting and powerful.”

“Sarah Sutton’s poem ‘Distance’ intrigued me upon my first reading – a poem about a failed relationship, its use of unusual imagery and quick succession of half-rhymes weaves it out of cliché ground, and presents a fresh read that I immensely enjoyed.”

Sex Lives of the Potato Men
by Walker Zupp, edited by Rebecca Parkinson

“Walker manages to balance dark humour with a harrowing insight into negative feelings about life that everyone can relate to and which he writes so well. From the title you would not expect the beauty and truth of the last couple of stanzas.”

“A lovely short story about a man and his birds. It contains both seriousness and farcicalities of the world. A delightful read.”

Return of the Stranger
by Laura Saunders, edited by Betty Doyle

“Laura Saunders’ ‘Return of the Stranger’ is a thrilling piece, plunging the reader into an opulent world of grand dinner parties, stately homes, and a lifestyle of excess before plunging into a deadly mystery. The story twists and turns, taking the reader on a chase to find the truth, with unexpected shocks along the way. A truly exciting read I was captivated by from its beginning to its end.”

Time for the Garden
by Lesley Burt, edited by Hannah Clarke

“A new and refreshing piece of poetry which pushes the expected boundaries of structure. With vivid images of nature and strong sensual description, this is a piece which reminds you of summer months but with a touch of fear about the quickness of time.”

Established by undergraduates in the Department of English and Creative Writing at Lancaster University, Flash is a showcase and forum for creative, critical, and hybrid work by our students. Flash aims to step beyond the restrictive conventions of degree assessment.

Flash on Other Sites

Follow @FlashLancaster
All comments on posts are subject to approval and editing prior to publication.
Background image by 'Couch Commando' and used in accordance with Creative Commons.